Carmelitas are the way to satisfy any sweet tooth. Who can resist a layer of melted caramel and chocolate sandwiched between a shortbread crust and oatmeal topping?

Carmelitas are one of our absolute favorite desserts (right up there with sugar cookies and coconut pie).

They are the perfect balance of buttery shortbread, creamy chocolate, rich caramel, and a crumbly oat topping.

Carmelitas are one of those desserts that we don’t make very often, but when we do, they don’t last very long.

They are a little on the messy side but so worth it. Just a quick tip, it’s best to read the recipe all the way through before getting started.

There are several different parts and steps, and the bars have to set in the fridge for a while before serving.

These bars are best made over the weekend or on a day where you’ll have plenty of time to devote to baking.

Since this recipe contains several steps, I’ve included them in the post and included some tips, as well as, a condensed version in the recipe card.

Within a day or two of the post going live, there will also be a video showing the process.

If you watch the video through until the end, you’ll see what happens when the Chocolate Oat Carmelita Bars are cut just a wee bit too soon.

It’s really important to let them cool completely. More about that later.

The parchment paper should wrap around the sides to ensure the contents don’t spill over into the pan while cooking.

Using parchment paper helps with clean up and keeps the gooey caramel from sticking to the sides.

Using a hand or stand mixer with a paddle attachment, mix the softened butter, brown sugar, salt and flour into a soft dough resembling loose cornmeal.

The dough should hold together when pressed.

Place the dough into the prepared pan and press evenly to cover the bottom. Cook the mixture on 325°F for 20 to 30 minutes or until golden brown.

Cooking times may vary depending on pan type and oven. Remove from oven and allow to cool.

The caramel sauce is easy to make and only takes a few minutes.  I like to use Kraft Caramel Bits or Kraft Caramel Squares depending on what’s available at the grocery store.

The squares will take a bit longer simply because they have to be unwrapped.

Either way, place the contents of the entire bag of caramels into a saucepan with the heavy cream.

Cook over medium heat while stirring every couple of minutes until the mixture will begin to melt. At that point, constantly stir to keep it from burning.

After the caramel has melted and is combined with the heavy cream, it’s ready to be added to the crust.

Before adding the caramel, sprinkle 1 cup of semi-sweet chocolate chips over the cooled crust.

Next, carefully pour the caramel sauce over the chocolate chips.

The mixture will be thick and should hold together when pressed. Using your fingers or a spoon, place the mixture on top of the caramel in a layer.

It’s okay if some of the caramel seeps through.

Preheat oven to 350 degrees. Place pan in the oven and cook for 15 minutes.

Caramel may begin to bubble slightly and oat topping will start to brown. Be careful not to overcook because the caramel will burn.

Remove the carmelitas from the oven and allow them to cool for about 30 minutes before transferring them to the refrigerator.

Place the pan of carmelitas in the fridge and allow to chill until set. This is where I messed up in the video, and I knew better.

It was later, and I was trying to get the video finished. I didn’t leave the bars in the fridge quite long enough, so the chocolate and caramel was a hot mess. Quite literally!

The good thing about the caramel sauce in this recipe is that it will still be gooey even after refrigeration.

Cut the dessert into squares and serve. After the carmelitas cool in the refrigerator, remove and place on the counter for storing. 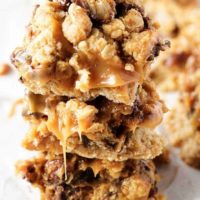 *Nutritional information and calories listed are an approximate and based on ingredients and servings used the recipe. *We love to use Ghirardelli Chocolate Chips for this recipe. If you need to stock up on Ghirardelli baking supplies, here’s a direct link to their site.

Thank you, Olajumoke! We hope you enjoy the bars. Have a lovely Monday :)

Made these for thanksgiving. They were a hit. Sooooo delicious! Thank you for the recipe. This is definitely going to be a new family fave!

Thank you, Tiffany! We are thrilled you liked the carmelita bars. Thank you for coming back to let us know you made them. Have a lovely Sunday :)

Made these for thanksgiving. They were a hit. Sooooo delicious! Thank you for the recipe. This is definitely going to be a new family fave!

You had me at caramel. They look delicious, I can not wait to prepare them and surprise my family with them. I can imagine them with a cold glass of milk, They look easy to make and something that everyone in my family would enjoy. Saving the recipe to use soon

Thank you, Monica! We are glad you liked the carmelitas. We hope you and your family enjoy the dessert. Have a great Friday :)