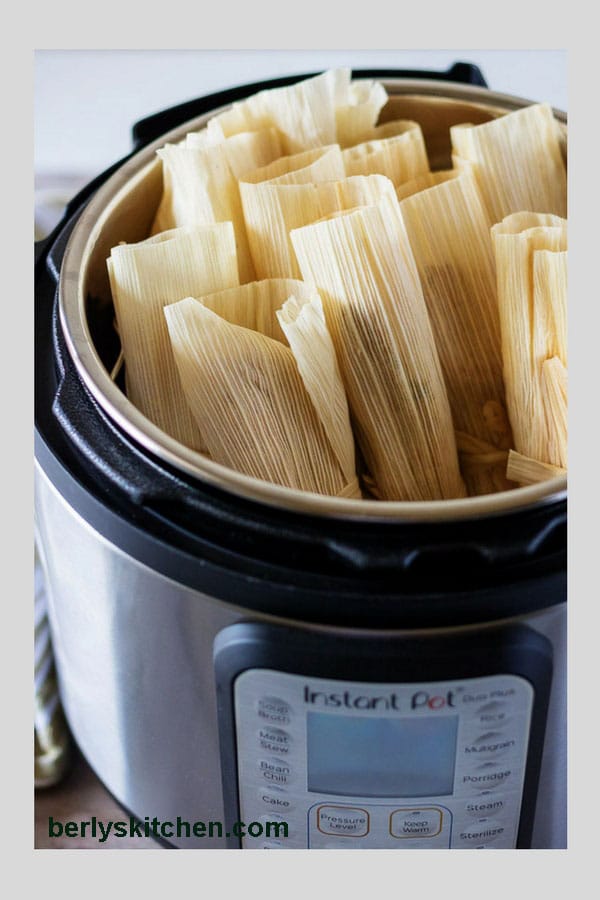 Instant Pot Tamales with Cheese and Green Chiles are a great way to cure a Tex-Mex craving. There’s no need for a giant steamer pan when you make them in the Instant Pot.

Have you ever had a tamale? I hadn’t until about 10 years ago or so.

A lady used to come by the office where I worked and take tamale orders every Monday. She charged $1 per tamale and sold them in batches of 20.

Our paydays were on Fridays, so every Friday she’d be back with our orders. Tons of people in the office had huge freezer bags of steaming hot tamales for lunch, dinner, and meals throughout the weekend.

The food was so popular that John asked me to order some for him and his coworkers. Funny thing was, I didn’t eat them. Chicken tacos, shredded beef tacos, or cheese dip was my idea of Tex-Mex.

One day I tried one and have been hooked ever since!

How to Make Instant Pot Tamales:

Instant Pot tamales are easy to make, but they do take some time. It’s a lot easier if you have more than one person to form an assembly line of sorts.

Start out by soaking the corn husks in a large bowl of warm water. This makes them pliable and easy to fold.

Mix the masa, spices, chicken broth, and vegetable oil in a large mixing bowl. The filling should hold together when pressed but not be sticky.

Vegetable broth can be used as a substitute for chicken broth to make this dish vegetarian. However, it may change the taste slightly.

Lard can also be used instead of vegetable oil. The recipe works either way with equal amounts of oil or lard.

Take a corn husk and place 2-3 tablespoons of masa filling into the center. Use the spoon to flatten it out a bit.

Add approximately half an ounce of cheese and a couple teaspoons of chiles. Fold the tamale at the smaller end of the husk and fold both sides in.

The top should remain open. Use a torn husk piece to tie the tamale closed. *See the video below for a demonstration of how to fold and tie a tamale.

Place the tamales into the Instant Pot, open end up, and close the lid. Make sure the valve is set to “sealing,” and set to high pressure (manual/pressure cook) for 25 minutes.

After the 25 minutes, allow a natural release for 10 minutes before completing a quick release. Earlier I mentioned that this method was not faster than the steam pot.

A few weeks ago, John and I both made a batch of tamales. I used the Instant Pot and he used the steamer pot.

We started at exactly the same time, and his finished about 15-20 minutes faster. This was due to the water in the steamer pot coming to a boil faster than the Instant Pot came to pressure.

The cook time on both was the same, but the Instant Pot also had the natural pressure release.

After the natural release, remove the lid and use tongs to carefully remove the tamales from the Instant Pot.

It’s best to let them cool for 10-15 minutes before eating. Store any leftover tamales in the refrigerator for 2-3 days.

It’s best to steam them slightly to reheat or wrap them in a damp paper towel and microwave. Leave the tamales in the husks until they’re ready to be eaten.

*We used a 6-quart Instant Pot for this recipe, and were able to fit approximately 15 tamales. However, that number will vary depending on the size of the tamales.

*It's best to heat the chicken broth slightly before mixing it with the masa. Heated broth helps it to mix easier.

*This recipe is not intended to be "traditional" tamales. It's a recipe that we created to share with friends and family that's easy to prepare.

Hi, I'm new to my instant pot! Are you supposed to preheat the pot before putting stuff in, or does the preheating not hurt the cooking process? Really want to make these for my friends and for work! :)

If you are using the "pressure cook" function, then preheating isn't required. Using that method requires the lid to be in place. The lid locks, the pot builds pressure, and the lid cannot be removed until the cook time is over. There are lots of cooking methods for the Instant Pot, so this isn't true for all of them. The user's manual is great for detailing how each work. :)

Our tamale recipe uses the pressure cook function, so everything will start cooking after you've added the food, water, lid, and started the timer. Hope that helps! Have a fantastic day! :)

How can I make this without husks? Tamale pie? I can’t find organic husks anywhere, so I would like to make this in a different structure, in the instant pot!

Good Morning Josie, that's a good question. So, I spoke with Kim and she suggested banana leaves. Now, we've never tried them before, but I've eaten tamales wrapped in banana leaves while living in South Florida. In fact, in Miami, it's quite common for tamales to be wrapped in banana leaves or palm leaves and them steamed. Other than those options, we're not sure. I wouldn't try tamale pie in the Instant Pot, as it may burn. I hope this information helps, have a lovely day :)

I apologize about that! I can contact our ad agency and have them troubleshoot it. Can you please tell me if you watched the ad all the way through? If so, what happened? The video generally starts, then an ad will begin. After the ad plays, the video will resume. Thanks so much for your help!

Thanks for linking to my salsa recipe!

You are most welcome! It looks and sounds delicious. We love homemade salsa! :)