How do you make baked potatoes even better? By adding all sorts of tasty ingredients like sour cream, bacon, and cheddar cheese!

While they do take a bit to cook, they’re definitely worth the wait. So, shall we get started?

How to make twice baked potatoes?

First, start by preheating your oven to 400° F, and washing the potatoes. Scrub all the dirt off of them.

Next, wrap them in foil and place them on a baking sheet. Don’t forget to poke holes in them so the steam escapes.

After that, let the potatoes cook for about an hour or until they’re soft. Remove them from the oven to cool for at least thirty (30) minutes.

In the meantime, you can cook the bacon while the taters cook and cool. Once the bacon is done, crumble it.

When the taters are cool enough to handle, remove the foil, cut them in half horizontally, and scoop out the filling.

Now, place the scooped out skins into a large baking dish or onto a sheet pan.

Then, grab a mixing bowl, and use a hand mixer or potato masher to combine the taters, butter, milk, sour cream, and half the shredded cheese.

At this point, I recommend doing a taste test and adding the salt and pepper as needed.

Now is a good time to make sure your oven temperature has been reduced to 350 degrees F. for the second bake.

Afterward, when the filling is ready, start adding it back to the potato skins.

When all the potatoes have been filled with the loaded mashed potato mixture, top them with the remaining cheese and crumbled bacon.

Last, place them back into the oven to bake for about twenty (20) minutes or until they’re done. 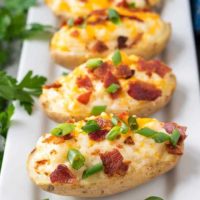 The calories listed are an approximation based on the ingredients and a serving size of half (1/2) a potato. Actual calories will vary. Any leftover from the twice baked potatoes recipe can be stored in a sealed container in your fridge for up to three (3) days.