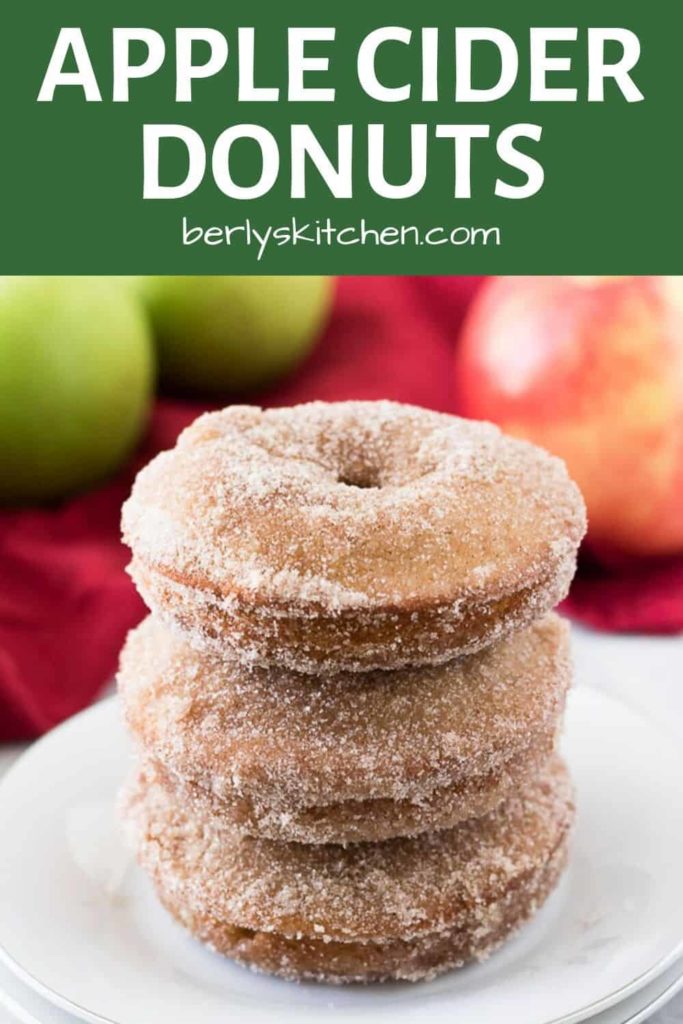 Homemade apple cider donuts seasoned with apple pie spice and sprinkled with a cinnamon and sugar topping. A simple treat that’s done in 30 minutes or less!

Donuts, one of my guilty pleasures. Usually, Kim and I will make cake donuts during the holidays.

In fact, we already a vanilla donut recipe on the website. But, since apple season is in full effect we decided to share an apple themed donut recipe.

How to make Apple Cider Donuts?

First, preheat your oven to 350°F, and grease a donut pan with butter or non-stick cooking spray.

Next, in a large mixing bowl use a whisk to combine the flour, baking powder, salt, and apple pie spice.

After that, grab another mixing bowl and your hand mixer. Use the mixer to beat together the butter and both of the sugars.

Then, add the eggs and vanilla extract. Once again, use the mixer to combine these ingredients with butter and sugar mixture.

Okay, once you have the butter, eggs, and sugar combined, add the dry ingredients to the bowl.

Using your hand mixer, blend everything together on low speed. It’s time to pour in the apple cider and milk.

Again, use your hand mixer, on low speed to incorporate the cider and milk into the batter.

If you’ve followed all the directions, your donut batter should look similar to the one (1) shown above.

Finally, all that’s left to do is transfer the batter to the donut pan. Personally, I would use a small metal spoon or a frosting decorator for this step.

Place the apple cider donuts into your preheated oven to bake for ten (10) to twelve (12) minutes. Afterward, place them on a cooling rack to cool.

While the cake donuts cool, you can start prepping the cinnamon and sugar topping.

To begin, grab a bowl large enough to fit one (1) donut. Melt the butter and grab another similar sized bowl.

Mix together the apple pie spice, cinnamon, and sugar. Dip a donut into the melted butter.

Then, dip the same donut into the cinnamon and sugar mixture. Set it aside and repeat the process until all the apple cider donuts have been topped.

That’s it, your apple cider donut recipe is done! Kim and I hope you enjoy this treat and wish you all the best 🙂

How many calories are in an apple cider donut?

The calorie count for our recipe is 347 calories per donut. However, calorie counts are always going to vary based on the ingredients and the amount of each ingredient used in the recipe.

Additionally, the calories will vary based on the serving size. What I recommend is to look at the recipe card (if on a food blog) or go to the company website (Dunkin Donuts, Walmart, etc.) and search for the nutritional information.

How do you heat up apple cider donuts?

Typically, you have two (2) options; your oven on low heat (around 200 degrees F.) or your microwave on low power for fifteen (15) second intervals.

The calories listed are an approximation based on the ingredients and a serving size of one (1) apple cider donut. Actual calories will vary.

*The calories are an estimate and are based on the ingredients and serving size listed. The calories can vary depending on the brand of product purchased.