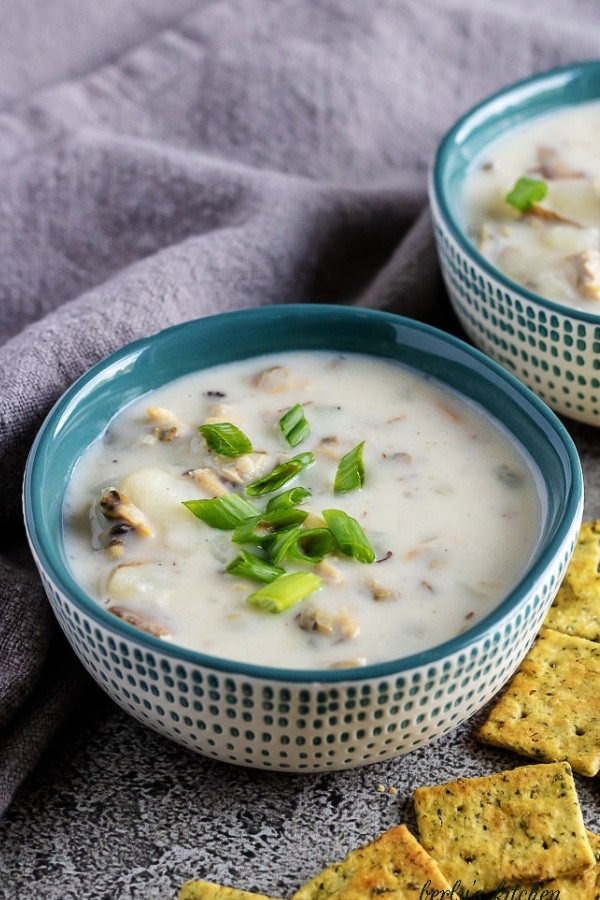 An Instant Pot clam chowder recipe that has all the flavor of a slow-cooked soup. This creamy dish comes loaded with clams and potatoes.

I hate to sound like a broken record, but wow, it’s definitely Fall here. The temps have been in the 40’s with highs in the 60’s.

It’s the perfect weather for soups and stews. That’s why Kim and I decided to share this clam chowder recipe.

Now, I know it says Instant Pot, but you can also make this on the stove. With that being said, it will take a little longer, but I think you’ll be rewarded nicely.

We tried to mimic all the flavor of a New England clam chowder, but simplify the process. Similar to it’s traditional cousin, our Instant Pot clam chowder recipe has most of the same ingredients.

I used clams, potatoes, onions, celery, and blend of spices. If you wanted to do the trinity of cooking, you could add some carrots.

Just keep in mind that carrots might sweeten the soup. As you can see from the photos, Kim add sliced green onions and served the clam chowder with crackers. Given how simple and tasty this dish turned out, it’s the perfect lunch or dinner option for Fall.

Start by opening the can of clams, yes, I chose canned because getting fresh clams in Arkansas is not easy or cheap. After that, dice the celery, onions, and potatoes.

That should be all the prep work you need to get the recipe going. First, in your pressure cooker, combine the seafood stock, diced onions and potatoes, celery, garlic, salt, pepper, thyme, and bay leaves.

Don’t forget to take out the bay leaves later on. They’re basically inedible and your guests won’t appreciate it if they’re left in.

Next, set the pressure cooker to Manual/High Pressure, depending upon the brand you own. Let the ingredients cook for 5 minutes.

Once everything is done, carefully, perform a quick release and remove the bay leaves.

Now, go ahead and turn the pot onto Saute/Cook. While it begins to heat, whisk together the corn starch and half and half.

Make sure you get all the clumps broken down and blended. Afterward, grab the clams and the corn starch mixture and pour them into the pot.

Then, stir the clam chowder as it continues to heat. The soup will thicken as it cooks. Once it has reached your desired thickness, turn off the cooker.

Last, serve the Instant Pot clam chowder recipe with toppings of your choice. We like green onions and crackers, but feel free to use whatever you like.

Other Instant Pot soup recipes you may love: 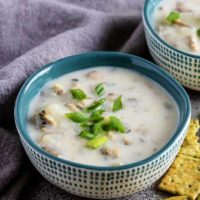 The calories listed are an approximation based on the ingredients and a serving size of about 1-cup. Furthermore, it does not include the green onions, crackers, or any other topping you might add. The soup can be stored in your fridge in a sealed container for up to 3-days.