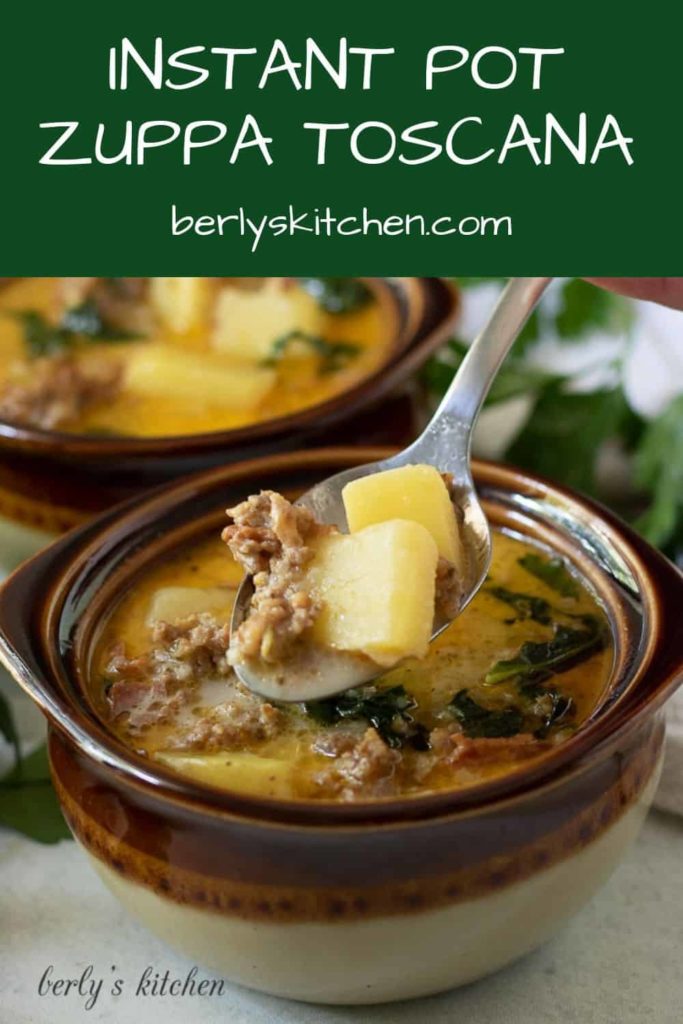 Instant Pot Zuppa Toscana is the perfect blend of potatoes, sausage, kale, bacon, and a touch of heavy cream. This copycat recipe is full of hearty ingredients and easy to make in your Instant Pot.

Whether you call this Instant Pot Zuppa Toscana or sausage and potato soup, this copycat recipe is one of the most popular soup recipes I see each Fall and Winter.

It’s easy to see why. Olive Garden made this soup a classic when they begin offering as a Soup, Salad, and Breadsticks menu option well over a decade ago.

People have been recreating the recipe at home for years. We’ve decided to make our version in the Instant Pot that way it cooks slightly faster than on the stove top.

This recipe is also versatile, so you can play around with the ingredients and add or omit whatever you like.

Let me say a couple of things before we get started on the recipe. We’ve developed this recipe so it’s all cooked in the Instant Pot.

However, you could easy cook the bacon on the stove top or in an air fryer while the sausage cooks in the Instant Pot. It’s up to you.

Additionally, I like to add the heavy cream before pressurizing the pot. This scares a lot of people due to the concern of the cream curdling.

If that is a worry, hold off on adding the heavy cream until after the cooking process.

Toss it in along with the kale, and everything will be good! Now, that those things are out of the way. Let’s make some soup!

Start by sautéing the chopped bacon in the Instant Pot liner until it’s crispy. Then, use a slotted spoon to remove the bacon to a waiting paper towel lined plate.

You can either clean out the liner or leave the bacon grease. It’s up to you.

Next, toss in the onions, Italian seasonings, and sausage. Break up the sausage while it cooks. Once it’s done and no pink remains, add the garlic and let it cook for a minute or so.

Add the broth to mixture and use it to deglaze the pan. Scrape off any food that has stick to the bottom of the liner.

Now, turn off the cooker. Afterward, pour in the heavy cream and toss in the cooked bacon and raw potatoes.

Close the lid, and make sure the valve is set to “sealing.” Press the manual (pressure cook) button and adjust the time to 5 minutes.

When the timer goes off, allow the machine to complete a ten minute natural release.

After 10 minutes, carefully open the valve to release any remaining pressure. Remove the lid, and give the soup a good stir.

Add the fresh, chopped kale and place the lid back on the machine for about 4 to 6 minutes. It will soften the kale a little before serving.

That’s it, remove the lid, stir the sausage and potato soup and serve. Kim and I hope you enjoy the Instant Pot Zuppa Toscana recipe and wish you all the best 🙂

Unfortunately, we do not recommend freezing this soup. The heavy cream has a tendency to separate and the potatoes do not hold their texture very well.

They can become grainy and mushy when reheated. The soup should be stored in the refrigerator in an airtight container and consumed within 3 to 4 days.

What’s the difference between Zuppa Toscana and potato soup?

Our Instant Pot Potato Soup with Bacon is similar to this recipe, but there are a few key differences. Like this sausage and potato soup, our potato soup also has heavy cream, potatoes, and bacon.

However, the potato soup does not contain sausage, kale, or Italian seasoning. In fact, this is true with most baked potato soup or loaded potato soups. Their flavor profile varies quite a bit from sausage and potato soup.

Is there a healthier, lighter version of Zuppa Toscana?

Yes, there are some substitutions that can be made that will lighten this soup up a bit. The instructions of this version of Instant Pot Zuppa Toscana Soup outlines a number of options to make this soup healthier.
Continue to Content
Prep Time 10 minutes
Cook Time 20 minutes
Come to Pressure and Natural Release 20 minutes
Total Time 50 minutes

*The calories listed are an approximation based on the ingredients and a serving size of about one (1) cup of the zuppa toscana soup. Actual calories will vary.