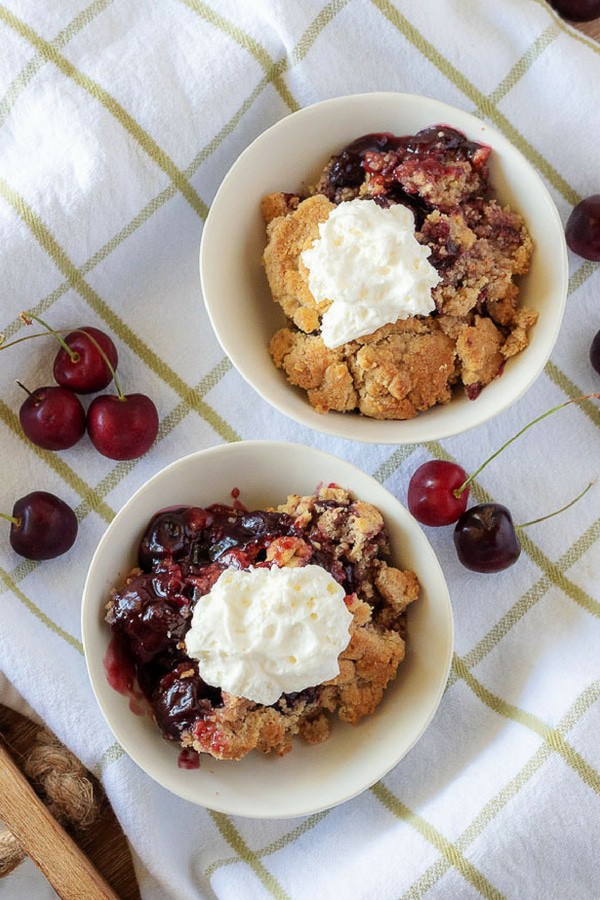 A simple, delicious, homemade cherry crisp that doesn’t use cherry pie filling. In less than an hour you can make a cherry dessert that everyone will love.

Crisps are some of my favorite desserts. We already have an apple crisp recipe on the blog, so Kim wanted to add another one.

What could be better than apple crisp, you ask? Well, we think our cherry crisp is just as good. Kim hopes you’ll feel the same way too.

Before getting started, Kim looked at a few cherry crisp recipes and noticed a trend. Everyone seems to use cherry pie filling. So, Kim put in the extra time to make a homemade filling.

I think you’ll be pleased with the results. If your looking for a recipe that uses canned cherry pie filling, then try our easy cherry dump cake recipe.

How to Make Homemade Cherry Crisp:

First, go ahead and preheat your oven to 350 F. degrees and grease a 9 x 13 baking dish. Set the dish aside.

Once that is done, prep your ingredients, like washing and pitting the fresh cherries or thawing the frozen ones.

Next, in a large saucepan, combine the cherries, sugar, cornstarch, and cinnamon. Give everything a good stir to mix in the cornstarch.

Then, cook the cherries over medium-low heat until the mixture thickens then remove from heat. It should take about 10 minutes and the cherries should have a nice thick consistency but still have some liquid.

Last, pour the filling into the prepared baking dish and then get started on the topping.

Now, if you’re not using a food processor you’ll need to chop up those pecans and do your best to mash that butter into the other ingredients with a pastry cutter or fork.

Afterwards, use your fingers to place the topping over the cherry filling in an even layer. There may be some areas that aren’t covered or you might have extra cherry crisp topping like we did.

First, place the crisp in the oven and bake it for 30-35 minutes or until the top is golden brown.

You may have to turn it once halfway through the cooking process if your oven doesn’t cook evenly. Not everyone has a custom kitchen, some us live in rentals.

Next, remove from the cherry crisp from the oven and allow to cool before serving.

Then, top it with ice cream, whipped cream, or your other favorite toppings.

Last, store any leftovers in a sealed container for up to three days.

Top this dessert with one of our whipped creams, like our Homemade Whipped Cream or our Irish Cream Flavored Whipped Cream!

The calories listed are an approximation based on the ingredients and does not include the whipped topping. Actual calories will vary. The cherry crisp can be stored in a sealed container on your counter for up to 3-days.

I love literally anything with a crisp topping! I would love to make this for the holidays.

Thank you, Bianca! Kim and I hope you give it a try some time. Have a lovely day :)

Cherry is my fvorite fruit. And i love everything cherry. But your dessert is one of the best. Cherries that are sweet, pecans that are cruchy, with that crisp with cinnamon flavor is the end of the world! Seriously! :)

Thank you, Catalina! We had a bunch of left-over cherries in the fridge when Kim decided to make this recipe. We're glad it turned out well and people seem to enjoy it. Have a lovely day :)

Oh me, oh my, I love a good crisp anything. This is the perfect recipe for this time of year as cherries are in season. I'm such a fan of these types of dessert recipes, as I'm gluten-free it's easy to make alternations.

Thank you, Nadelie! This is one of my favorite crisp recipes and like you said, it's pretty easy to make it gluten-free. Have a lovely day :)

My whole household loves cherries! It is about the only thing we agree on! This is something I will be making soon and everyone will be in love I am sure. Thank you for the new recipe for a crisp! Apple or blueberry has always been our go to.

Thank you, Shelley! Kim and I hope you enjoy the crisp and are happy you want to try it. Have a lovely day :)