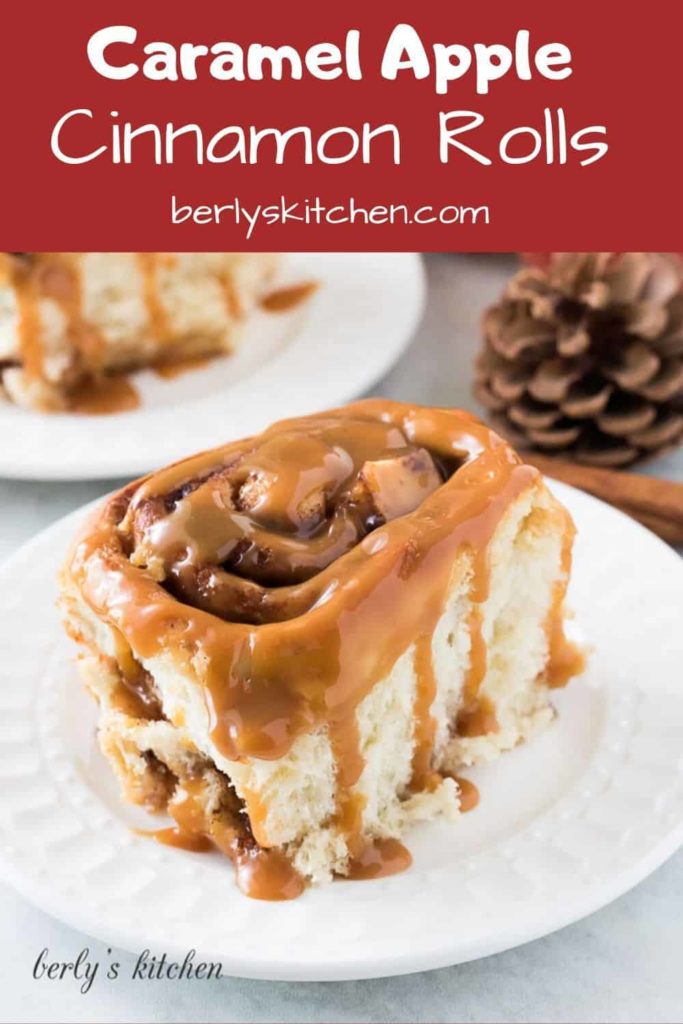 A tempting combination of silky caramel and tart apples all rolled up in a flaky and delicate cinnamon roll guaranteed to make any breakfast amazing.

It’s been almost three (3) years since we published this recipe, so it was due for an update, including process photos.

Kim took new pictures and modified the dish slightly to make it more approachable for new cooks. So, shall we get started?

Caramel apple cinnamon rolls can be a tricky breakfast to make if you are new to cooking. So, we’ve provided detailed instructions and photos showing some of the process.

The first thing you will want to start is the dough. In a large mixing bowl combine two and half (2.5) cups of flour, with the sugar, salt, and yeast. Whisk the ingredients together.

Afterward, in a small pan, heat the water, milk, and butter to around 115°F. Then, add the warm mixture to the dry ingredients.

At this point you can add the egg.

Transfer the sticky dough to a stand mixer. Use a dough hook, on the lowest setting, and mix everything.

Add the rest of the flour a tablespoon at a time.

Once all of the flour has been added, continue to mix the dough for another five (5) to seven (7) minutes. Now, lay the dough out on a floured surface.

Afterward, take the dough and use a rolling pin to flatten it out into a rectangle.

It’s time to make the filling and create your cinnamon rolls.

To make the filling, all you need to do is combine the apples, both sugars, cinnamon, and nutmeg in small mixing bowl.

After that, spread the softened butter onto the dough. Then sprinkle the filling over the butter.

When you’ve finished adding the filling, roll the dough into a log and cut it into ten (10) to twelve (12) rolls.

Place the apple cinnamon rolls into a greased nine (9) by thirteen (13) inch pan. Go ahead and preheat your oven to 350 degrees F.

Cover the pan with foil or a kitchen towel and put it in a warm place for the dough to rise until the cinnamon rolls have doubled in size.

Once the rolls have doubled, bake them in the preheated oven for about twenty-five (25) minutes. While the pastries bake, the caramel sauce can be prepared.

In a small saucepan heat the heavy cream over low heat and add the caramel. Do not let the cream boil or it may break.

Slowly whisk the mixture until it smooth and creamy. Finally, pour the sauce over the apple cinnamon roll and dig in!

Can you freeze cinnamon rolls?

Actually, yes, you can freeze this recipe. With that being said, you’ll want to prep the rolls completely before freezing.

In other words, prepare the dough, cut the rolls, and place them into an aluminum pan. Let them rise, as directed, then cover them with plastic wrap and foil.

Now, they’re ready to freeze. The caramel apple cinnamon rolls will hold in your freezer for about two (2) weeks.

When you’re ready to cook them, pop the rolls into a preheated oven (350 degrees F.) for twenty-five (25) to thirty-five (35) minutes, or until they’re golden brown.

Why didn’t my cinnamon rolls rise?

See what I mean? They’re can be numerous reasons why your dough didn’t rise. I recommend ruling them out one by one until you get it right.

Cooking, like any other skill, takes persistence and practice. Giving up and blaming the recipe, the cooking show host, etc. will not fix the dish. 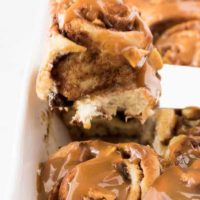 The calorie count listed is an approximation based on the ingredients and a serving size of one (1) caramel apple cinnamon roll drizzled with around two (2) tablespoons of caramel sauce. Actual calories will vary.