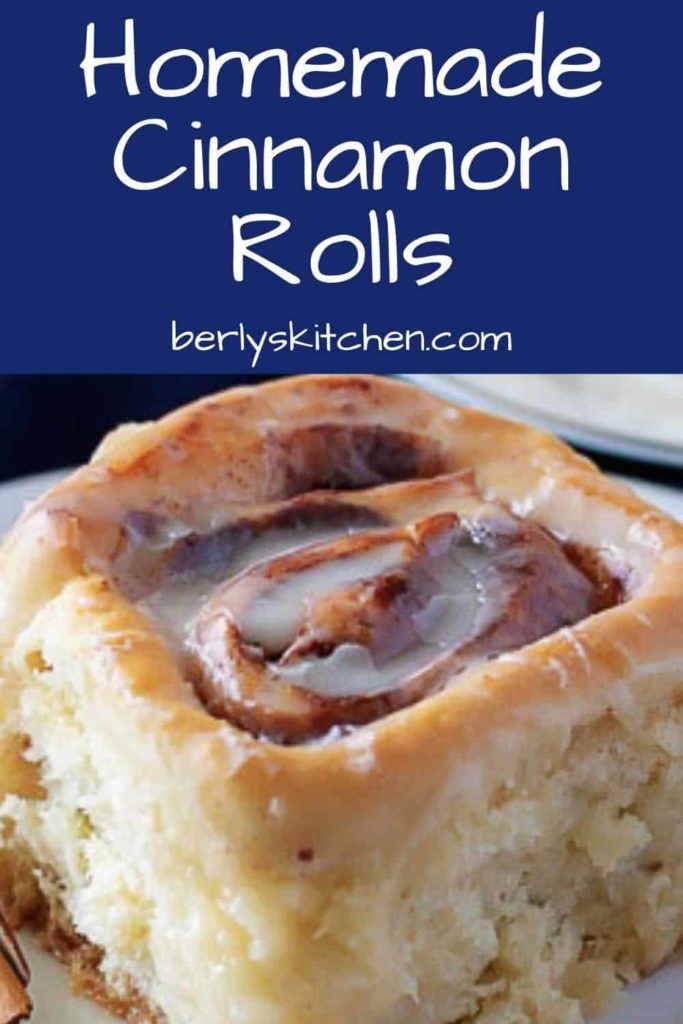 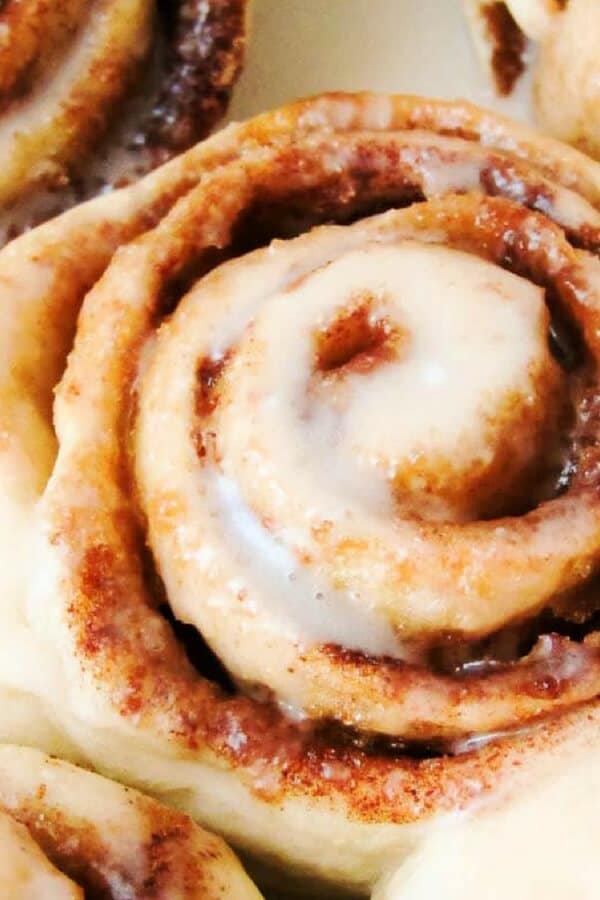 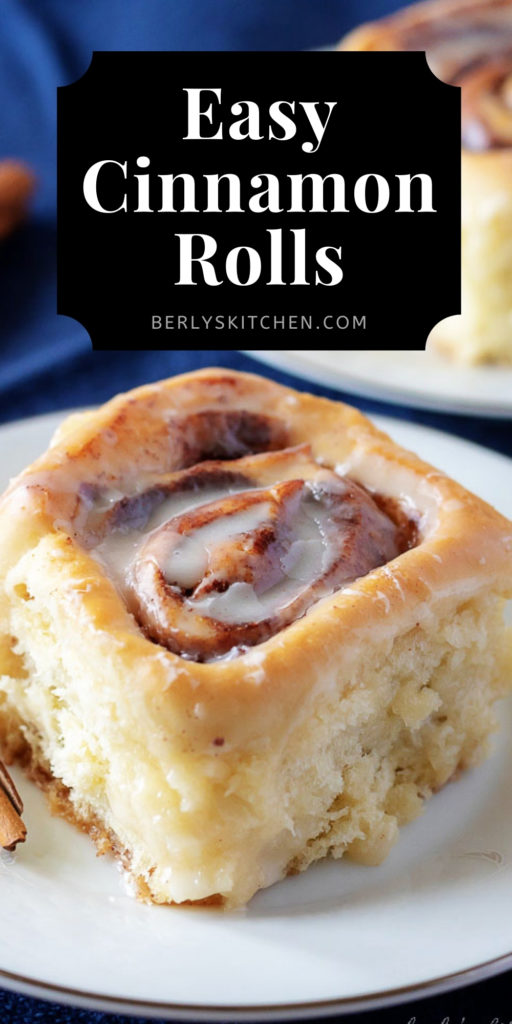 Easy Cinnamon Rolls are one of the best breakfast, or desserts, around. Our version is soft, light, and packed with brown sugar and cinnamon. After the cinnamon rolls bake to a beautiful golden brown, they’re drizzled with a sweet vanilla glaze.

Who doesn’t like warm, gooey, cinnamon rolls from scratch? They are certainly some of our favorites.

Whether you call them cinnamon scrolls, cinnamon buns, or sweet rolls, they seem to be a favorite with most people.

This is our recipe for soft, easy cinnamon rolls filled with plenty of cinnamon and brown sugar. Then they’re topped with a sweet vanilla glaze.

I’ve made these easy cinnamon rolls with both active and instant yeast and have gotten consistent results. Check out the “Tips” near the bottom of the post to see the alternate version.

Start by measuring 2 1/2 cups of flour into a large bowl. Reserve the remaining flour just in case you need to add it later. It’s better to start with less and add additional flour as needed.

Depending on the weather, I’ve used close to 4 1/2 cups of flour. Let the amount of flour listed be a guide. It’s not set in stone.

Next, add the sugar, salt, and yeast to the flour. Give it a stir to combine the dry ingredients.

Use a large measuring cup or microwave safe bowl to heat the water, milk, and softened butter.

Don’t overheat the liquids. It only needs to be heated to about 110 to 115 degrees. Otherwise, it will kill the yeast.

Use the dough hook attachment and mix on low speed until all the flour is combined. At this point, you should know whether or not the additional flour is needed.

If the dough is wet, sticky, and stuck to the sides of the bowl, more flour is needed. Add additional flour about a 1/4 cup at a time.

Stop adding flour when the dough pulls away from the sides and bottom of the bowl. It will also be smooth and soft to the touch.

The dough shouldn’t stick to you fingers when touched. Continue to mix for 5 to 6 minutes on low-medium speed. Then, let the dough sit and rest for 3 to 5 minutes.

Rolling Out the Dough:

Transfer the dough to a lightly floured surface and roll into a rectangle.

I was able to get a decent sized rectangle of 16-inches x 10-inches. This isn’t necessarily the size you’d have to roll out. It’s the size that normally works in our kitchen.

Use a spatula or your hand to spread the softened butter across the surface of the dough. Next, add the brown sugar and cinnamon. Make sure to leave 1/4 inch to 1/2 inch around the edges without filling. That way it won’t spill out as you roll.

We use ½ cup of brown sugar and 4 tablespoons of cinnamon. Please use these amounts as a guide and adjust to your tastes.

Roll and Cut the Rolls:

Starting with the longer side of the dough, carefully roll the dough as tightly as possible making sure the cinnamon and sugar mixture is on the inside. Pinch the seam slightly to ensure the cinnamon rolls are secure.

Use a sharp knife, bench scraper, or dental floss to cut the length of dough in half. From there continue cutting even pieces until you have the desired number of cinnamon rolls. We normally cut between 10 and 12.

Place the cut cinnamon rolls into a greased 9 x 13 inch baking dish. Cover the dish with a clean towel or plastic wrap, and set it in a warm area. This is also know as proofing the dough.

The cinnamon rolls should double in size. The amount of time this takes varies greatly on the temperature of your home and where you place the pan.

We like to preheat the oven, and place the cinnamon rolls on the stove. It usually takes about 30 minutes to an hour depending on the temperature of the kitchen.

After the cinnamon rolls double in size, place them in the oven that’s been preheated to 350 degrees, and bake for approximately 25 minutes or until golden brown.

Remove the cinnamon rolls from the oven and allow them to cool until they’re just slightly warm before applying the icing.

If you don’t want to double it, the cinnamon roll icing makes just enough for a light coating.

Whisk together the vanilla, milk, and powdered sugar. Add additional milk as needed to reach the desired consistency.

Use a spatula to apply the icing to the slightly warm cinnamon rolls.

How do you activate yeast for cinnamon rolls?

Over the years we’ve heard from some readers that the yeast didn’t activate after being added to the dry ingredients.

If you are using active yeast or have concern that the yeast isn’t being activated prior to being added to the flour mixture, here’s what we recommend as an alternative.

Heat the milk and water as directed but leave out the butter. Stir in the sugar and yeast and allow the yeast to foamy and tan in color. Next, add it to the flour, salt, butter, and egg then mix as directed.

We’ve used both active and instant yeast for this recipe, and both work well.

Having trouble working with yeast? Here’s a post we wrote to explain how to activate yeast.

How do I adjust this recipe for high altitude baking?

As mentioned above, start by using less flour and adding more as needed. Different environments, altitudes, and weather will affect this recipe.

I’ve used anywhere from 2 ½ cups to a little over 4 1/2 cups of flour depending on where I’ve lived and the indoor/outdoor humidity.

If you live in the mountains, the bake time and temperature may need to be adjusted slightly. Check out this article for more information about high altitude baking.

Can I freeze the cinnamon rolls before they’re baked?

Yes, our favorite way is to partially bake the dough before freezing then finish baking it when you’re ready.

Here’s how. Bake the cinnamon rolls at a slightly lower temperature (325°) for about 15 minutes, let them cool, bag them while they’re still in the pan, and freeze them.

When you’re read to bake the rolls, let them thaw, then continue to bake until they’re golden brown. For more detailed instructions, check out this post on how to freeze cinnamon buns from King Arthur Flour.

Other easy cinnamon roll recipes you may enjoy:

*Check out our tips in the post for working with active vs. instant yeast.    *See post for in-depth instructions, recipe variations, photo, tips, and questions that we’ve answered regarding the recipe.   *Environmental factors cause the amount of flour required to vary slightly by region.  We’ve linked to a great resource in the tips section of the post.   *Recipe makes approximately 10-12 cinnamon rolls.   *Calories listed are an approximate and based on the ingredients listed.    *We have not tried to substitute ingredients such as gluten-free flour, bread flour, almond milk, soy milk, etc. and cannot provide recommendations on the use of alternate ingredients.   *For the icing in the video, we used 2 cups powdered sugar, 5 tablespoons of milk, and 2 teaspoons of vanilla (a double batch). This made a thick and creamy glaze for the cinnamon rolls. The glaze in the photos was a single batch as shown in the recipe.

Delicious! Very happy with this recipe. My mixer couldn’t handle the dough so I had to knees by hand. Still turned out great and I got a quick arm workout! 😂

Thank you DeDe, we're thrilled you enjoyed the cinnamon rolls and got an arm workout as well lol! Have a lovely day :)

Does any ingredients have to be at room temperature?

The butter needs to be softened and the milk and water should be warmed. That's listed in the recipe, so as long as you follow it, you should be good! I always use an egg right out of the fridge. It would work fine at room temperature, too. Although, it's not necessary. Hope that helps! :)

These are perfect! 😋 I followed the recipe with active yeast, I don’t have a stand mixer so I used my bread machine for mixing and kneading then let it rest 5 minutes rolled out, added filling rolled up and cut into rolls. My house is cold so I placed plastic wrap (sprayed with Pam) on the top and placed in my microwave and prompt the door with the end of a spoon so the light would stay on, (that’s how I get my breads to rise)🤷🏻‍♀️ I set my timer for 1 hour to rise then baked at 350’ for 25 minutes let cool and topped with icing. I love baking breads (I’m not that good at it yet) and I never uses my bread machine I don’t like the breads I’ve baked in it, this was my first time to use it for mixing and kneading and it worked! 😉

Thanks so much for the comment! I love your workaround for proofing dough in the microwave. That's a great tip!

I use our new bread maker more for kneading than actually making bread. Lol! It comes in handy. We're so happy the cinnamon rolls turned out and that you enjoyed them. Have a wonderful evening! :)

I just wanted to say they are so easy to make and that is alot I am terrifed of yeast dough but I did activate it separately and worked wonderfully also I let them raise on the stove my family loved them they were gone by the next day been requested to please make more I would recommend this recipe to anyone !

We are so happy to hear that, and thrilled that your family enjoyed the cinnamon rolls! :) Thank you so much for coming back to comment. We hope you have a wonderful week!

HI there - Can I let the cinnamon roles sit for awhile before they bake? Am planning on making these before going over to a friend's house to bake, but don't want them to over-proof and mess them up!