Unbeknownst to me, this a popular shake. It seems it’s only offered at McDonald’s around this time of the year. How a mint flavored shake was ever associated with St. Patrick’s Day is beyond me. With that being said, people really like shamrock shakes.

Personally, I’ve never had one and only took a sip of Kim’s shake. I get it, the brisk hints of spearmint combined with sweet vanilla ice cream are hard to resist. But, when Kim approached me with the idea for a copycat shamrock shake recipe I was skeptical.

After the initial trial run, she did some tweaking and came up with this version for our blog. As I said before, I tasted it and it’s pretty darn good. I invite you to try it and see what you think. You might feel it’s not as good as the original, but at least you’ll have a shamrock shake to tide over for the rest of the year. Let’s go make a milkshake!

Okay, there’s not much to making a milkshake and our copycat shamrock shake is no different. In fact, if you can make a plain vanilla milkshake, then you already have the ability to make ours.

The only difference is the added ingredients. To get started, grab your vanilla ice cream, milk, mint extract, and food coloring. The whipped topping, cherries, and sugar are all optional.

However, if I had the garnishments on hand, I would use them. While they don’t add much extra flavor, they make your copycat shamrock shake look so much better.

Once you have all the needed ingredients, plug in your blender and add the ice cream, mint extract, food coloring, and finally the milk. Blend everything on high until you have a smooth and creamy copycat shamrock shake.

At this point, pull out your serving glasses and start pouring the shakes. Since the mixture comes out to about forty (40) ounces, we recommend four (4), ten (10) ounce servings.

When the shamrock shakes have been poured, top them with about two (2) tablespoons of whipped cream, a cherry, and a dash of green sugar. That’s it, you’ve made our copycat shamrock shake recipe. We hope you enjoy it as much as we did!

This is a recipe with a lot of wiggle room. For example, if you prefer thicker shakes, then reduce the milk from two (2) cups down to one and a half (1 1/2) cups. You want to add some chocolate flavor, then add chocolate syrup or Andes mints and turn it into a grasshopper. The point is, you can make this milkshake any way you desire.

One question I saw on Google was, “What is really in a Shamrock Shake?” Honestly, I don’t know. I would image, McDonald’s uses a proprietary blend, meaning a trademarked recipe. That means, it’s a protected secret and publishing it would be a bad idea. I feel, as long as the main flavors are mint and vanilla, it doesn’t really matter. And if you’re asking because you have a health condition (like me) and you’re worried about what’s in it, then you shouldn’t be eating it anyway. Probably not the answer you’re looking for, but it’s all I got.

Another question I saw was, “How much sugar is in a Shamrock shake?” Well, ours is homemade and it has approximately 45 grams of sugar. Mostly likely, other copycat shamrock shake recipes are going to have a similar amount of sugar.

The calories listed are an approximation based on the ingredients and a serving size of one (1) ten (10) ounce shake topped with whipped cream, a single cherry, and a dash of green sugar. Actual calories will vary. The copycat shamrock shake cannot be properly stored after mixing. Early preparation is not recommended.

Looking for a smoothie? We have great ones! 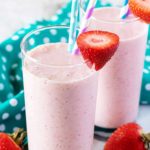 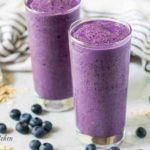 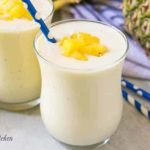 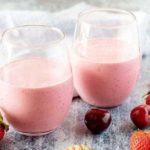