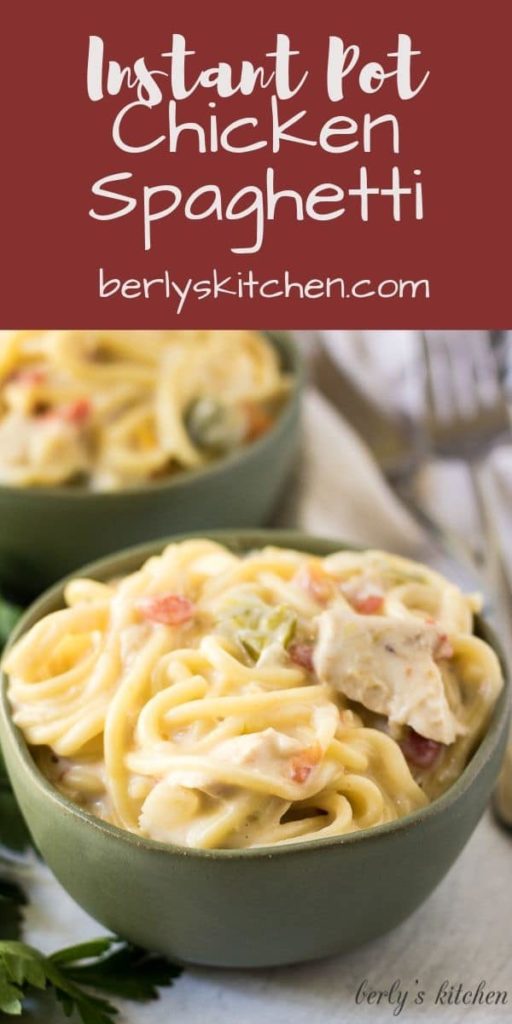 Man, is it really Wednesday already? Once again, we’re halfway through the week and the weekend is really close.

With that being said, there’s still a lot that needs to be done and the last thing you want to do is spend all evening in the kitchen. Fortunately, we’re sharing a quick Instant Pot chicken spaghetti recipe that’s done in less than thirty (30) minutes.

Meaning, you and your family can enjoy a home cooked meal in less time than it takes to wait for delivery. Now, just to be clear, this dish is spicy.

At least, I feel it’s a spicy dish due to the chilies. I’ve added a few tips at the bottom just in case you want to tone down the heat for your first attempt.

First, grab your Instant Pot and place the liner into the machine. After that, break the dry spaghetti into halves or thirds.

That way, it can all stay below the liquid. Next, drop the dry pasta into the liner long with the chicken broth.

Then, lay the raw chicken tenders on top of the uncooked pasta.

Once that’s done, dump in the chilies, onions, peppers, and tomatoes and green chilies combination.

At this point, you can place the lid on the cooker and set the valve to, “sealed.”

Go ahead and press the, “manual or high pressure cook,” button for a five (5) minute cook time.

When the timer goes off, let the appliance complete a five (5) minute natural release before opening the valve.

With the steam fully vented you can remove the lid and take out the chicken. Carefully, shred or chop the chicken and place it back into the liner.

Last, toss in the shredded Monterrey Jack cheese and cream cheese. Stir the ingredients to create a cheesy, creamy sauce for the pasta.

That’s it, you Instant Pot chicken spaghetti recipe is done and ready to serve!

Other Instant Pot pasta recipes you may love: 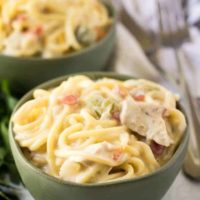 The calories listed are an approximation based on the ingredients and a serving size of about one-fourth (1/4) the total recipe when divided equally into four (4) portions. Actual calories will vary. The pressure cooker chicken spaghetti can be stored in a sealed container, in your fridge, for up to three (3) days.

I left out the can of green chilies. Spicy enough without them. Also added some shredded Swiss cheese. Love this recipe! Delicious!

Thank you Betty, we're glad you enjoy the recipe. Have a lovely day :)

This recipe was delicious! We doubled the recipe but still have a lot of leftovers. Could we freeze this?

We haven't tried to freeze it, but it should be fine. When you want to reheat the chicken spaghetti, heat it over low heat to prevent it from drying out. Thanks so much for giving it a try. John and I hope you have a great weekend!

Is this recipe for a 3 quart or 6 quart instant pot?

Good Morning Cathy, great question. It's for a 6-quart Instant Pot. Have a lovely day :)

This looks amazing, would it be bland if I left out the green chillies? Should replace it with something else. We dont like super spicy food.

Good Morning Christine, we talked a little bit about how to reduce the spice levels in the post. You have a couple of options, you can drain the liquid in the Rotel (tomatoes and chilies) for a milder version. To cut the spice back even more, you can double the Monterrey Jack cheese and drain the liquid. If you leave out the Rotel, the dish will be a little bland and there's nothing we know of that would replace that flavor without adding heat. I hope this information helps. Kim and I wish you a lovely day :)

I made this tonight and it was fabulous! Both my husband and I loved it. Of course as usual I didn't follow part of the directions but it came out great anyway. I have to have leftover onion or green pepper so I just put it all in - they were little so it wasn't a problem. But when I put the cream cheese in I put the whole block in! My husband happened to come in because he followed the good smell and asked me if I put it all in and of course I said yes. He said you were only supposed to put I half!! Oh well! And I dumped all of the cheese that was in the pack! It was soooo good! It will definitely be on our dinner rotation!! (mistakes and all!!)

Good Morning Bonnie, thank you for commenting and rating the recipe card! Kim and I are thrilled the chicken recipe worked out for you and your family enjoyed it. We appreciate your comment and we wish you a lovely day :)