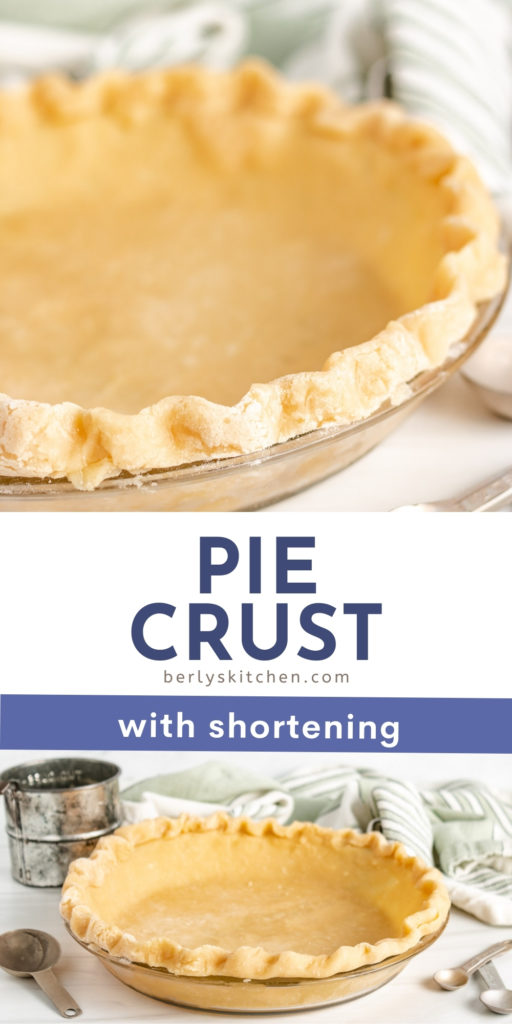 This easy recipe for Pie Crust with Shortening is made with a mix of butter AND shortening for a perfectly flaky and buttery crust. Use this simple pie crust to make your favorite sweet desserts and savory dinner pies!

Making the perfect pie crust can seem a bit daunting. A lot of people are either in camp butter pie crust or part of the shortening crowd. We choose both!

While we love a good homemade butter pie crust, we also think that shortening definitely helps this crust become nice and flaky. Before we get into the recipe, let’s talk a bit about what shortening does to a pie crust recipe.

Shortening is any fat that stays solid at room temperature though butter is not usually associated with shortening. It can be made out of vegetable oil, lard, or margarine. It gives baked goods a crumbly flaky texture without the need to have the perfect temperature as you would with butter.

For this crust recipe, a mix of butter and shortening are used to make a pie crust that has the benefits of both. A buttery taste with a flaky texture. You just can’t go wrong making this pie crust for any dessert or savory pie recipe!

Why You’ll Love This Recipe

How To Make Pie Crust with Shortening

Storing: If you’re making homemade pie crust ahead of time, store it in the fridge BEFORE rolling into circles. This will help keep the moisture intact. You can wrap in plastic wrap then store in the fridge for up to 5 days before using at room temperature.

Freezing: Wrap the prepared pie crust dough balls tightly in plastic wrap, then a layer of aluminum foil. The crust will stay fresh for up to 6 months. Thaw in the fridge overnight before setting at room temperature before rolling out and using for recipes.

What is the best shortening to use for pie crust?

You can use margarine, lard, or a vegetable shortening such as Crisco to make a perfectly textured crust.

Should shortening be chilled before making pie crust?

Yes! You’ll want frozen or very cold shortening to make crust to keep it from melting.

Yes! Cold pockets of shortening are responsible for making the flaky layers in a pie crust as it bakes.

Don’t forget to check out our Pie Crust with Shortening web story! 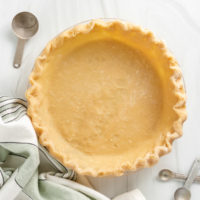 *The calories listed are an approximation based on the ingredients in the recipe card and a serving size of 1 slice of pie crust. Actual calories will vary. *For more information, tips, and answers to frequently asked questions, please refer to the post. *20 tablespoons of butter = 2 ½ sticks, 1 ¼ cups, or 283 grams. The amount of 20 tablespoons is used in the event that you’d like to half the recipe.