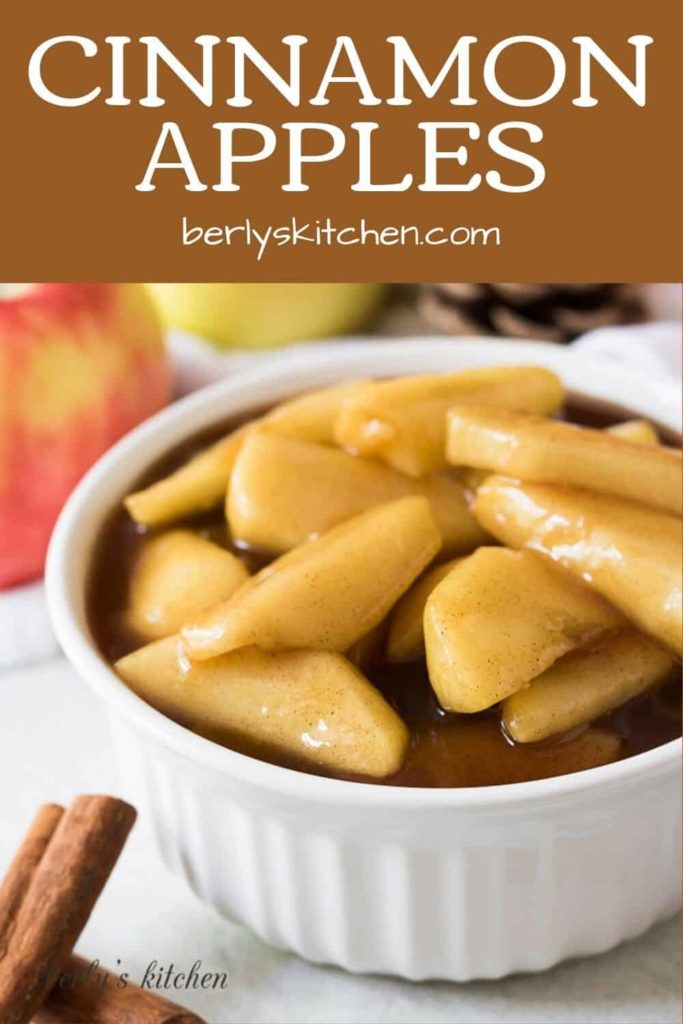 It only takes six ingredients, three steps, and one skillet to create a delicious cinnamon apples recipe. From pan to table in less than half an hour!

As apple season continues, Kim and I wanted to bring you another apple themed dish. For today’s post we’re sharing Kim’s easy cinnamon apples recipe. The name says it all.

Warm, tender apples, spiced with cinnamon and sweetened with brown sugar. It doesn’t get much better than that! Unless you’d rather make Crock Pot Cinnamon Apples instead of the stovetop version.

How to make cinnamon apples?

Now, with practice, that only takes about ten (10) minutes. However, if you’re new to the kitchen, then it may take a little longer.

Next, once the apples are prepped, grab a skillet and place it over medium heat. After that, toss in the butter and let it melt.

Then, when the butter has melted, add the apple slices. Let them cook for about five (5) minutes or until they’re tender.

While the apples cook, go ahead combine the corn starch and water to create a slurry. This will act as the thickener for your cinnamon apples.

Once the fruit has cooked, add the corn starch slurry, cinnamon, and brown sugar.

Afterward, bring the cinnamon apples to boil and let them simmer for about two (2) minutes.

That should be plenty of time for the, “sauce,” to thicken. Last, remove them from the heat and let them cool for minute or two (2) before serving.

That’s it, you’re easy cinnamon apples recipe is done! Kim and I hope you enjoy this Fall themed side dish and we wish you all the best 🙂

What can I do with lots of apples?

Oh man, the possibilities are endless. You can make this recipe, or apple pie, fresh apple cake, apple butter, apple preserves, the list goes on and on.

Simply go to Google and type apple recipes into the search engine and there will be an endless supply of ideas.

How do you boil apples?

I recommend washing, peeling, and coring the apples first. Then cut them into equal sized slices.

Place the apples into a pot, add about 1/4 to 1/2 a cup of water (depending on the amount of apples) to the pot. Bring the mixture to boil and let everything cook until it reaches your desired consistency (doneness).

The calories listed are an approximation based on the ingredients and a serving size of half (1/2) a cup of the cinnamon apples. Actual calories will vary.