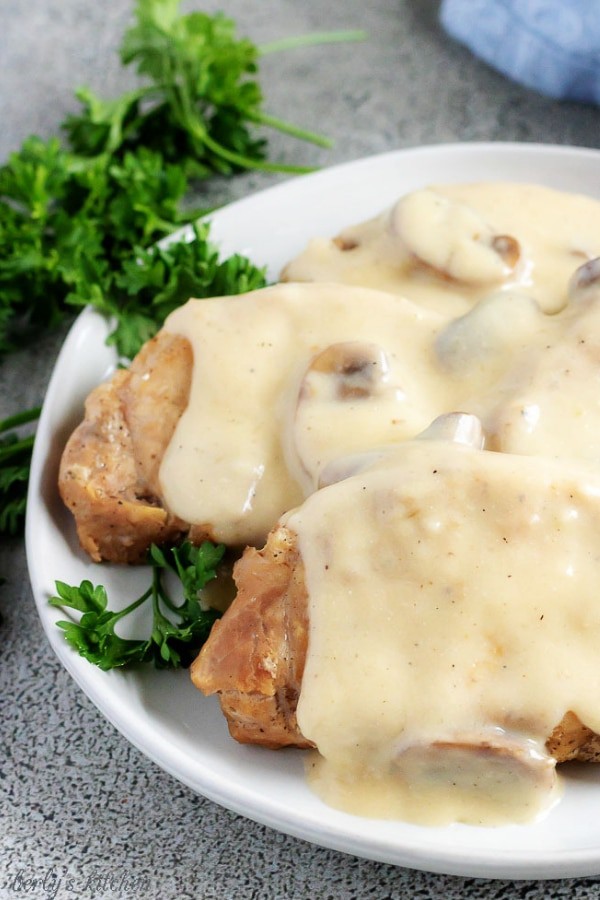 Pork chops have been a family favorite for years. However, this is the first time Kim and I have ever shared a pork chop recipe.

So, you know we wanted it to turn out properly. It took a little brainstorming to figure out how to create a creamy mushroom gravy in a pressure cooker.

With that being said, we think our method manages to recreate a comforting sauce without the risk of it breaking while the pork chops cook. The end product was exactly what Kim and I wanted for these Instant Pot pork chops with mushroom gravy.

Four, perfectly seasoned, hearty chops smothered in a smooth, mushroom gravy. Well, I use the term gravy loosely here because it’s not a traditional gravy, more like a cream sauce.

But, I think it works, and I believe you’ll be satisfied with the flavor and texture. Now, enough talking, it’s time to get down to business.

The Instant Pot pork chops do take a little more effort than most Instant Pot recipes, but we think you will enjoy it nonetheless.

How to make Instant Pot pork chops with mushroom gravy:

First, start by turning the Instant Pot to “Saute,” and add either vegetable oil or olive oil. Season both sides of the pork chops with salt and pepper.

Then add them to the pot, and cook them for about 3-4 minutes on each side until the chops are lightly browned.

If the pork chops are large, work in batches of two at a time. In regards to the oil, when using the Instant Pot, Kim and I generally sauté with vegetable oil.

Olive oil tends get too hot, pop, and smoke. That can make sautéing with it a bit too risky for our tastes.

Stir them to combine, and cook everything until the mushrooms begin to soften and the onions start to become translucent.

This process usually takes about 5-7 minutes. It’s not a long time, but you’ll want to keep an eye on them while they cook and stir the mixture every few minutes.

Then, add the garlic, and let the ingredients cook for an additional 30 seconds. Turn off the saute function, then add the chicken broth.

At this point, you should place the pork chops back into the Instant Pot, and close the lid.

Set the valve to “Sealing,” and use the manual/pressure cook option to cook the chops on high pressure for 10 minutes.

If you think that cook time is little too long, keep in mind you’re cooking pork, so I wouldn’t recommend lowering it. If you choose to do so, then you do it at your own risk.

After the 10 minute pressure cook has finished, allow an additional 10 minute natural release before opening the valve. Be careful when opening that valve.

Now, remove the pork chops, and set them aside. It’s time to make the “gravy.”

How to Make the Mushroom Gravy:

Afterwards, when the pork chops have been removed, combine the cornstarch and half and half in a small bowl.

Turn the Instant Pot back to “Saute,” and add the cornstarch mixture. Then, stir everything until the gravy begins to thicken.

Turn the pot off and add the sour cream, stir once more to mix in the sour cream. Some people may prefer to use a canned condensed soup instead of making the gravy from scratch.

However, we prefer the scratch-made version. We do have cream of mushroom soup substitute and a cream of chicken soup substitute recipes if you are a fan of soup but may not have a can handy.

Last, serve the gravy over the pork chops while the dish is hot. Any leftovers should be stored in the refrigerator, in a sealed container for up 3 days.

That’s it, you’re done, well, done with Instant Pot pork chops with mushroom gravy that is. You can serve this dish with Instant Pot mashed potatoes, sautéed green beans, a side salad, you get the idea.

Given this is longer recipe, I would recommend cooking some spinach for a side dish. Spinach only takes a few minutes with to cook when sautéed with a little butter and minced garlic. But, feel free to serve it with anything you desire.

Tips for Your Instant Pot with mushroom gravy:

Other Instant Pot Recipes you may enjoy:

*The calories listed are an approximation based on the ingredients and a serving size of one pork chop and 1/4-portion of the gravy. Actual calories will vary.

*The Instant Pot pork chops can be stored in the fridge in a sealed container for up to 3-days.

Thank you so much for this recipe. I made it tonight exactly how you had it but with one adjustment I did not add chicken broth I added a pkg of dry onion soup mix to one cup water (my fiance LOVES it.) Turned out AMAZING!! Thank you again.

Thank you Trisha! Kim and I are thrilled to hear you and your fiance enjoyed the pork chops. That's a great idea to use seasoned water in place of chicken broth. Thank you again for coming back to comment on and rate the recipe card! Have a lovely day :)

I made these pork chops for dinner this evening and was so happy wth them. The pork chops were moist and tender. The sauce was so yummy! The game changer was the fresh mushrooms in the sauce. It would not be the same with cream of mushroom soup. I will definiely make these again (with no changes to original recipe)! Thank you! ?

Good Morning Dianne, that's so wonderful to hear! Kim and I are thrilled that you enjoyed the pork chops. Thank you so much for coming back to comment on and rate the recipe card. Have a lovely day :)

This looks good.. I thought you added a can ofnushroom gravy but you make your own. Can't wait to try.. ican barely read the writing here so hope it's ok.

Thank you for commenting, Sandy! Kim and I hope you enjoy the dish and wish you a lovely Saturday :)