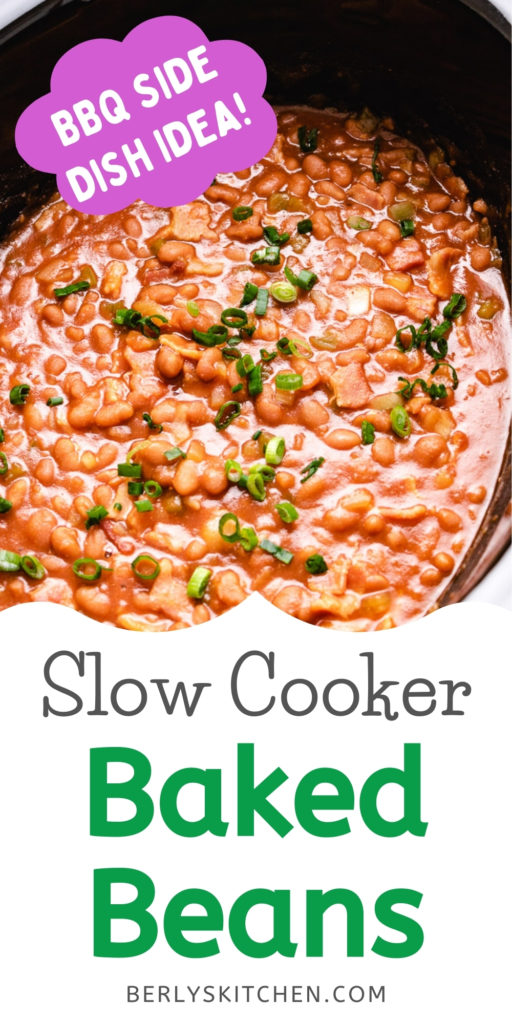 Slow Cooker Baked Beans are an easy recipe for tangy, sweet beans every time without turning on the oven. They make the perfect side dish for your next barbecue or picnic.

Baked beans are one of my family’s favorite Summer side dishes next to creamy coleslaw, deviled eggs, and macaroni salad. They are easy to make and full of BBQ flavor.

Baked beans are a common recipe, but everyone seems to add their own spin. We have a different recipe for Instant Pot Baked Beans, and one day, we’ll share our baked beans recipe that are cooked in the oven. For now, these slow cooker baked beans are taking center stage.

If you want to get technical, slow cooker baked beans aren’t actually baked. They’re slow cooked from the bottom and around the sides with consistent, low heat over several hours.

I guess you could probably call them slow cooker barbecue beans, too. Either way, these beans are a family favorite that bring back memories of fun get togethers, BBQS, and picnics with family and friends.

Why do you layer the ingredients in slow cooker baked beans?

It’s important to leave the bacon slightly undercooked and place it on the bottom of the slow cooker followed by the onions, green peppers, and bean mixture. Since the slow cooker heats from the bottom up, this allows the bacon to continue to cook and release more great flavor into the beans.

The same thing happens to the onions and peppers. As the slow cooker heats, it softens and cooks the vegetables and releases their flavor directly into the beans. If these ingredients were stirred in, they wouldn’t be in direct contact with the heat, and the bacon would not cook all the way through.

Absolutely! In fact, there are two ways to go about adding fully cooked bacon to slow cooker baked beans.

The first option is to cook the bacon until very crispy. Crumble it into pieces, and add it to the beans before they’re cooked. The bacon will soften as it cooks, and it won’t release the bacon flavor. However, the beans will have bacon cooked in when they’re done. You can always save a little to add over the top when the beans are finished.

The second option is to cook the bacon until crispy, crumble it into pieces, and stir it into the beans after they’ve finished cooking.

Will beans burn in the crockpot?

If your slow cooker tends to cook on the hotter side, it can cause the sugar in this recipe to burn around the edges or stick to the bottom. That usually happens when the beans are cooked on high instead of low or when they’re left longer than the recommended cook time.

When the sugar begins to burn, the beans can also overcook and even burn around the edges or on the bottom where the heat is the greatest.

Can you put raw bacon in the crockpot?

In regards to this specific recipe, we do not recommend using raw bacon. It should be partially cooked, as mentioned above. There’s no guarantee that the bacon will cook all the way through, since the beans we used are canned and only need to slow cook for 4 hours.

Other recipes that you may enjoy: 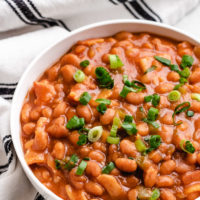 *The calories listed are an approximation based on the ingredients in the recipe card and a serving size of ½ cup of baked beans. Actual calories will vary. *For more information, tips, and answers to frequently asked questions, please refer to the post. *Recipe adapted from the cookbook Favorite Recipes From our Best Cooks ©1981.